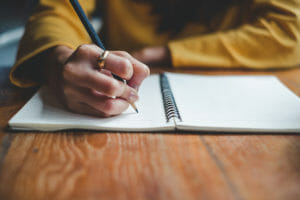 It’s probably been a while since you’ve last written an academic essay, and if you’re like most people, this doesn’t bring you much distress. Ironically, though, those grammar-obsessed English teachers from your high school and college days – who seemed to care way too much about comma placement and paragraph structure – can actually teach us a lot about marketing. The surprising reality is that many of the thought processes that go behind writing a good essay also go behind creating a successful marketing campaign.

When you begin writing an essay, before you even think about putting pen to paper (or finger to key), you have to first establish who your target audience is so you can craft your essay accordingly. It doesn’t matter how well-written or well-structured your essay is if it doesn’t appeal to your target audience, and marketing campaigns are no different. You could spend countless hours working on a social media ad campaign that reaches thousands of people, but if it doesn’t reach the ones who will ultimately be purchasing your product or service, then it does you no good. When trying to determine your target audience, it’s important not to cast too wide of a net; not only is doing so far from cost-effective, you risk missing out on the select fish you are really after. Once you determine a reasonable and suitable audience to go after, you can begin working on the campaign itself.

At least one of your old English teachers undoubtedly recommended that you create an outline for your essay before you begin writing. Whether or not you actually followed this advice, it is hard to argue its effectiveness in helping construct compelling essays. For marketing campaigns, creating an outline is so effective it is practically imperative. By organizing your plan of action into a comprehensive outline, it becomes much easier to plan and execute each part of your campaign, and to transition seamlessly from one part to the another. It also gives you a chance to mentally work through your campaign before it actually begins so you have a chance to catch any unforeseen complications. Also, because a successful marketing campaign is inherently a team effort, outlines are even more important because they allow everyone to have a clear understanding of where the campaign is currently at and where it is headed.

The Importance of Vacation

Building your Personal/Professional Brand with Social Media Part 2 by Derek Champagne, The Artist Evolution
Let’s Get Personal: How to Increase Engagement on B2C Emails Don’t Sleep on… Sleep