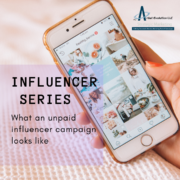 If you missed Part 1, you can read it HERE!

Influencer marketing campaigns have quickly become the norm for brands looking to expand their reach to consumers in a less obtrusive way than traditional advertisements. However, despite this popularity, many brands, especially smaller ones, are still hesitant to dedicate large portions of their marketing budgets towards influencers.

In other words, high-profile, well-established influencers come at a hefty price, but they are also more likely to realize a greater return on your investment due to the sheer number and quality of their followers. For small businesses who can’t afford these high-profile influencers (think: $100,000 for one post on three of the influencer’s social media platforms) the risk of buying low on “micro-influencers” can be intimidating.

On one hand, micro-influencers are a great option for small businesses looking to tap into the benefits of influencer campaigns without having to expend their entire annual marketing budget on a handful of featured posts; but on the other hand, measuring the actual return-on-investment for lower tier influencers can be difficult, and some brands can struggle to find the right micro-influencers for their niche.

Before you know it, you could have spent thousands of dollars trying to find the perfect micro-influencers for your brand only to come up empty handed. But for small businesses who are able to find their dream-influencers, the cost associated with acquiring them is well worth it. For those with less success, though, an unpaid influencer campaign may be the way to go.

Daniel Wellington (DW), a Swedish watch company founded in 2011, is the poster-child for unpaid influencer campaigns.

Beginning as a $15,000 start-up, DW was able to grow to into a multi-million dollar company solely by giving away their watches–that’s right, they just gave them away. DW’s founder Filip Tysander went all-in on his unpaid influencer campaign, giving watches to thousands of influencers and incorporating exclusive coupon codes and branded hashtags.

Before long, DW watches could be seen on the wrists of countless social media personalities and DW climbed their way from a humble start-up to an industry giant. Unfortunately, the success of DW’s unpaid influencer campaign will likely never be repeated today. When DW launched their campaign, they were at the forefront of influencer marketing. Since then, things have drastically changed.

Granted, that isn’t to say that unpaid influencer campaigns can’t still be effective, only that they must be approached differently, and will likely fail to reach the same degree of success.

An unpaid influencer campaign has numerous benefits for small (and sometimes even large) businesses. For companies whose primary selling point is their product, giving product away to influencers for free can potentially have more upside than simply paying them.

For one, if the influencer likes your product enough, they may organically promote it. And unpaid endorsements carry much more weight than paid ones because, at this point, consumers can spot a paid promotion when they see it, and they can tell when a social media figure truly believes in the product they are promoting.

Finding success with an unpaid influencer can even open the door for a traditional paid partnership–this is one way of mitigating some of the risk associated with lower tier influencers. If you really believe in the quality of your product, you can even give it away to notable YouTube reviewers in hopes that they highly rate and recommend it, but this is by far the riskiest form of unpaid influencer marketing because you can’t control what a reviewer might say about your product.

If you decide to start an unpaid influencer campaign, it’s crucial that you target people with real engagement (no inflated like counts from bots), and with followings that closely align with your own target audience.

Searching for people who have already promoted your product (either knowingly or not) is a great way to start. You know they already have a liking for your brand, so the chances of them working with you are much higher.

If you’re targeting higher-tier influencers, who will be less receptive to unpaid partnerships, make the relationship mutually beneficial. One way you can do this is by offering to promote them on your page.

Granted, this strategy only has leverage if you have a decent social following of your own, so it won’t work for everyone. Once DW began to gain traction, they utilized this approach by featuring one person on their page a week. In order to be featured, they told their followers to post a picture of themselves wearing a DW watch and used their designated hashtag.

Unpaid influencer campaigns aren’t for every business, but for those with product-centric models, it is a route well worth consideration.

Want to learn more about paid influencer campaigns? Click HERE to read the final installment of the TAE Influencer Series!

What We Really Enjoy About the World Cup

An Intro to Blogging for the Non-Content Marketer

Round Animals Roll Through this Ad