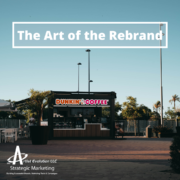 Nothing grabs consumers’ attention quite like a rebrand. Rebrands often invoke the same reactions as, say, full-beard to clean-shaven transformations—that is, reluctant acceptance or outright rejection. The goal of a business undertaking a rebrand is to transition to a new brand identity with as little turbulence as possible, but this rarely happens.

People naturally resist change. If you’re going to switch things up, there are many factors to consider.

The most common, and relatively safe, type of rebrand is a logo design change. These types of rebrands almost always face some degree of push-back from consumers, but it usually does not last long. The type of rebrand that really makes waves comes when a business changes their name. It is one thing to alter appearance, but a change in name is a change in identity–and that is not an easy thing to pull off.

We saw this play out not long ago when pancake-powerhouse IHOP toyed with the idea of changing their name to IHOB (International House of Burgers). Before the widespread and passionate backlash from consumers got too out of hand, IHOP said “psych” and attributed the name change to a marketing ploy for raising awareness of their new menu change.

Whether or not the name-change successfully increased their burger sales is uncertain, but it did teach us an important lesson: name-changes are fickle things and should be considered with great caution.

The latest household name to implement a name-change is Dunkin’ Donuts—or, rather, “Dunkin’”—and their rebrand went much smoother than IHOP’s.

Instead of using their name-change as a publicity stunt like IHOP did, Dunkin’ opted for a more discreet approach. They framed the removal of “Donuts” from their name as a natural evolution of their brand rather than a deviation from it. The result was a successful, non-turbulent rebrand.

But the question is, was it worth it?

According to an interview with Dunkin’ CEO David Hoffmann, Dunkin’ dropped the “Donuts” from their name for a three primary reasons:

Changing a brand’s identity in accordance with market trends (e.g., healthier eating) is a dangerous game. Even if pancake consumption starts to suddenly decline across the nation, for example, it would be unwise for IHOP to turn that “P” upside down (as history as shown).

Going from the House of Pancakes to the House of Burgers is an unnecessarily drastic change in identity that is sure to provoke backlash, but going from Dunkin’ Donuts to simply Dunkin’ is a subtle change that is much easier for consumers to accept.

If there is one lesson to take away from the Dunkin’ rebrand, it is this:

A brand’s name should accurately encapsulate its identity (who they are, what they offer, etc.). If you find that your brand’s identity has drifted away from its name for whatever reason, then a brand change may in fact be in order. How you go about this change is up to you. You could take the under-the-radar approach of Dunkin’, the feather-ruffling approach of IHOP, or maybe somewhere in between. What matters most is that there is a logical reason for it.

Navigating an Isolated Market: The Effect of COVID-19 on Businesses