Very recently, a certain comedian had one of her tweets go viral for all the wrong reasons. Without getting into the details, the backlash, and the offensive verbiage, I want to look at one corporation’s response after being pulled into the narrative.

A little bit more background before we begin. In the back and forth after the aforementioned tweet went viral, the comedian included in her explanation a mention of being on the drug Ambien at the time. Using the brand name of the drug instead of simply using a generic phrase like “sleeping pill” painted a huge target on a very valuable brand name. The makers of Ambien, Sanofi, now had to make a decision on how to handle this very bad publicity

The clock was ticking and the first good lesson from this is how vitally important the timing of a tweet can be. Very likely, Sanofi has a dedicated team keeping up to date on any mention of their brand in the media via Google and Twitter alerts. Developing a list of key words and phrases you want to keep up to date on is a good practice. Another important step is setting up alerts and diligently checking them. Sanofi was able to quickly identify the issue and begin working on a response.

Now let’s take a look at the tweet itself:

Let’s break this down a bit. First, the tweet very wisely starts with a reaffirmation of the company’s message. Getting your message into the narrative is vitally important, especially when dealing with bad press. The message here also clearly paints a picture of the company’s stance on the topic of racism and diversity which was the catalyst for the bad press to begin with. They do a good job here at being very direct on the subject and tie it in with the brand messaging very well. More importantly, they are distancing themselves from the controversy.

The second sentence in the tweet brings in some humor and throws a bit of “shade” in as well. In my opinion this is probably the best part of the response. It is important to make sure that your stance on a particular subject is clear, direct, and has a sense of finality. This tweet does an excellent job at that. Sanofi also does a brilliant job at using the fact that the side-effects of medication, an often joked about topic, did not play any role in the offensive tweet. By doing this, they are stating that neither they nor their drug Ambien share any blame in the fallout from the problematic commentary. It is light-hearted, direct, and clever at the same time.

The takeaways here are:

–        Be aware: tap into the resources that will keep you up to date on the topics and conversations that are important to you

–        Stay on message: make sure that you present your brand message at every opportunity

–        Be final: direct and clear communication will prevent prolonging the negative exposure

–        Be clever: it is important that your message is heard and remembered but cleverness should never come at the sake of clarity or when it has the potential for creating more negative attention 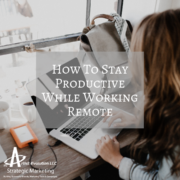 Pick Up Your Camera!

What Kind of Environment is Your Office?

Chobani Goes for a Dip

How to Stay Productive While Working Remote