Back in 1997, the very first social media platform was born. The platform, named Six Degrees, had humble enough origins. Inspired by the “six degrees of separation” theory – which claims that people are six or fewer social connections away from each other – Six Degrees was simply a way for people to preserve and rekindle personal relationships with friends and family, and to create new connections along the way. But since then, social media has become so much more.

Perhaps one of the most intriguing developments to come out the social media revolution of the past two decades is that companies have not only nudged their way into the social networking landscape but many have thrived there. In a place primarily meant for personal connections, how are some businesses so successful? The answer is simple: they are emulating the personal connections on which social media was founded. They are positioning themselves less as organizations and more as people.

For some businesses, this could merely mean using more personal, conversational language in their posts. For others, it means having their brand take on an identity of its own – Wendy’s, with their track record of roast-style tweets and nonchalant humor, is a great example of the latter: 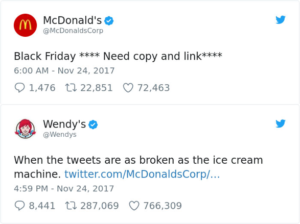 Many companies have followed Wendy’s lead and begun to humanize themselves more on social media. The result has been a social media presence that far exceeds the reach expected of a business in an inherently personal network. Pulling off this feat, granted, is much easier said than done. Trying to assimilate a company into social media without coming across as an advertiser (even if this is, nonetheless, a form of advertisement) can have the unintended consequence of appearing affectatious – sort of like an adult trying to fit in at a high school party. That is why understanding your company’s identity on social media, and its inherent limitations, is crucial for its success.

Although Wendy’s is roasting other accounts on Twitter, they’re not trying to hide the fact that they are a fast-food joint; instead, they are blending both the corporate and the personal to give themselves the best chance at organically and effectively reaching customers on social media, and this is something that every business can achieve in some degree. In its earliest form social media was centered solely around personal connections, and though it has evolved since then to account for businesses, its identity is essentially the same – acknowledging this is crucial for your company’s social media success.

3 Ways to Use Google Plus to Increase your Online Presence

How to be Successful with Lazy Branding

How to Make Your Voice Heard
Traditional TV Advertising Vs. Streaming