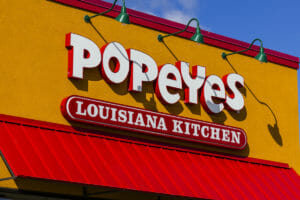 During the past couple of weeks, restaurant chain Popeyes Chicken has stumbled its way into the social media spotlight as they accidentally pulled off one of the most successful product launches in recent history. On August 12th, Popeyes announced on Twitter that they would now be selling chicken sandwiches – not exactly a front-page worthy announcement. But what ensued from this normal, run-of-the-mill product launch was far from ordinary. 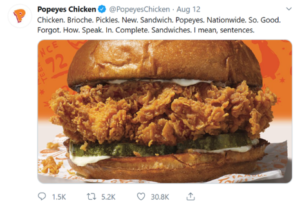 As this tweet shows, Popeyes’ announcement yielded some relatively respectable – and expected – numbers, but thanks to the unpredictable nature of social media virality, their mundane product launch miraculously turned into an estimated $23.25 million in advertisement value.

If you’ve been on Twitter in the past week, or any social media platform for that matter, chances are you’ve come across someone talking about chicken sandwiches. And if you’ve driven past a Popeyes recently, you’ve probably wondered why the line is longer than usual – like much longer. The answer lies not in the above tweet’s 30.8k likes, or even its 5.2k retweets, but entirely in its 1.5k mentions.

The real hero behind the success of Popeyes’ product launch is not their marketing group – for even they admitted they did not foresee it being so successful – but everyday people. Popeyes made a simple announcement – “we now sell chicken sandwiches” – but the Twitter population turned it into something much more.

What ensued was a social media war over which fast-food chain has the better chicken sandwich: Popeyes or Chick-fil-A (the previously undisputed king of fast-food chicken sandwiches). People all across the country began to join in on the conversation and, to the benefit of Popeyes, this meant an unprecedented surge in sales. Although Popeyes’ marketing team can’t be credited with deliberately starting what has become dubbed as the #chickenwar, they are largely responsible for scaling it.

Upon recognizing that their chicken sandwich was turning into a social media trend, Popeyes quickly adapted their approach from “New Sandwich. Popeyes. Nationwide” and joined in on the debate: 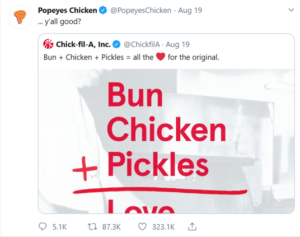 As you can see, this tweet (7 days after their original announcement) has a noticeably different marketing approach, and noticeably different engagement results. By joining the Twitter war-zone, Popeyes essentially dumped lighter fluid on an already raging fire. Consumers had already been picking sides, so when Popeyes went after Chick-fil-A, the brand war ignited and Popeyes undeniably came out on top.

The fact that we are even talking about Popeyes right now is a testament to how successful their social media marketing campaign was. What has occurred in the past couple of weeks is a great case study for other brands looking to optimize their social campaigns and drastically increase positive exposure.

It may seem ironic that it was the general public who was primarily responsible for the success of Popeyes’ product launch, and not Popeyes themselves, but in reality, the best marketing approaches are those which pay attention to the people they are trying to reach. Popeyes may not have done this initially, but their decision to switch gears and let the public do their advertising for them led to an unparalleled and unforeseen amount of success.

A Marketing Lesson from Red Bull