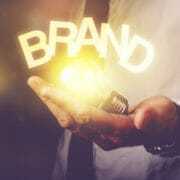 Logos – we see them everywhere yet hardly pay them any mind. It’s usually not until a logo has been changed that we actually notice them. Regardless if we are aware of logos, however, they are a crucial part of a brand’s identity. A good logo does more than signify, “This is our brand” – it encapsulates all that the brand stands for, especially its products and/or services. It’s the first thing consumers see and it’s what they attach their experiences to – good or bad – after engaging with a brand. Perhaps it is needless to say that a good logo is important, but the question remains, how do you know if your logo is, in fact, good? And if you don’t yet have a logo, how do you know which logo to decide on?

Creating the perfect logo is like picking out an outfit: How should I best showcase myself? What is the weather like outside? Does this suit my personality? Can I pull that look off? Etc. A number of variables go into consciously picking an outfit – the same goes for a logo. Ultimately, it is the responsibility of the graphic designer to create an image that best encapsulates a brand, or at least comes as close to encapsulating it as possible. Sometimes, though, a logo design doesn’t need to inherently convey to the consumer what the brand is or does. Just think of some of the most well-known and trusted brands. Coca-Cola’s logo tells us nothing about what is contained inside the can it’s on other than that it is soda. Pepsi is even more obscure. However, consumer experience with Coca-Cola and Pepsi creates a set of associations not present in the logo itself. It is these arbitrary associations – which are hard to identify clearly yet are integral to a brand’s market presence – that give a logo its value.

It’s great if you can create a logo that both encapsulates a brand in and of itself while also conforming to its preexisting associations (assuming they are favorable), but more often than not you will have to appeal first and foremost to the latter, that is, the preexisting associations. A logo can only inherently convey so much about a brand. The majority of a logo’s value occurs when it acts simply as a link between a consumer’s experience with a brand and the brand itself. Simply put, people like the taste of Coca-Cola (a lot), and when they see a gleaming red Coca-Cola can with its white-script cursive font, they associate their previous satisfactory experiences of drinking a Coke with the logo itself. Once this link is created, it becomes increasingly stronger over time. So long as the logo is linking a brand with good experiences, it is an ideal logo.

Despite this, however, brands rarely keep their logo unchanged for any considerable length of time. Most companies undergo numerous logo changes over their lifespan. Usually, and ideally, these changes are miniscule. They simply keep it looking fresh and “with the times.” Any drastic change to a logo should be done with severe caution, for when you drastically change the appearance of a logo, you consequently break its linkage with the consumer. Only when you feel this link has to be broken – say, for example, when the brand itself has changed and such a link is no longer connects to what you want it to – should you do so. Just take a look at a couple of successful brands that unnecessarily broke their link with their consumers by drastically changing their brand appearance:

You may faintly remember Tropicana’s brief rebranding back in 2009, or you may not – it did not last long. In hopes of creating a sleeker and more modern company image, Tropicana ditched their familiar straw-in-an-orange design for an un-welcomed, and unfamiliar, glass of orange juice bearing the words, “100% orange, pure and natural.” As a consequence, they broke the strong and beneficial link between their product and their consumers, who complained that they could no longer even recognize Tropicana on the grocery shelves.

Instead of creating a sleeker and more modern brand image, Tropicana became generic and forgettable. Even if their new logo had been less generic, it still would’ve broken years of buying patterns reaffirmed in that straw-punctured orange. It didn’t take long for Tropicana to recognize their mistake and revert to their previous logo; however, their unnecessary brand overhaul was not without its consequences. Tropicana experienced a 20% drop in sales within the first month of their rebrand and lost an estimated $50 million in the process, thus opening the way for competitors to strengthen their brand identification.

GAP’s short-lived brand change shared the same fate as Tropicana’s; however, their new logo design faced so much immediate and fervent backlash that they reverted to their original and comfortably familiar logo within a week of abandoning it. Like Tropicana, GAP wanted to create for themselves a more modern brand image. The distant, fading blue square in the background of their week-old logo was supposed to signify their moving on from old ways toward a more modern and sleek future (signified by a, generically, modern font). Instead, they destroyed years’ worth of positive consumer/brand associations in favor of a brand image so foreign and vague they lost all market awareness. Although GAP was able to change their logo back with relatively little financial consequence, their failed attempt at brand evolution serves as an important lesson about the importance of logos. Logo changes should reflect changes within a brand, and more often than not these changes are gradual. Logos, therefore, should be changed incrementally over time as opposed to drastically in a short period of time. It’s up to you to decide this pacing, but it’s better to err on the side of preserving that which you’ve already created.